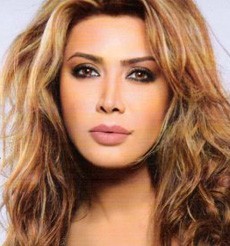 Nawal al Zoghbi is a famous Arabic pop singer from Lebanon, and the muse that inspired the first wave of music videos in the Arab World.

Nawal is said to possess the most photogenic and telegenic face in the industry, and ranked #5 on the list of Sexiest and Most Desirable Arab Women for 2009. She later on ranked 16th in Top 100 Sexiest Arab Women 2010. Always radiant in Elie Saab dresses, she paved the way to other red carpet stars. She was also the first female Arab artist to be featured in a Pepsi commercial.

Nawal al Zoghbi is widely known across the Arab World, parts of Europe and North America. She is now entering her third decade in the pop music industry and has bravely outlived all new trends and latest arrivals while always remaining on the top! She is sometimes reffered to as Nawal El Zoghbi - The Chameleon Lady.

She began her artistic journey in the early 90's and was for a long time the protege of producer and director Simon Asmar, who signed her under Studio el Fan management . After taking part in the famous TV talent show (1988), Nawal went on a two-year tour singing in the Gulf countries.

With the support of Elie Deeb, her husband then, she released her first album entitled "Wehyati Andak" in 1992, followed by hits like "Ayza El Radd" and "Balaee Fi Zamany" with great success.

In 1996, Nawal released one of her highly successful albums "Habeit Ya Leil, which included her hits "Habeit Ya Leil", "Noss El Alb", and a Khaliji dialect song "Ghareeb El Ray". The latter was exceptionally popular and is thought to be the song that initiated the larger Arabic public (North Africa and Levant) to the Khaliji dialect and percussion. Soon after, all other artists wanted to follow in that path! That same year, she collaborated with Wael Kfoury in a nice duet that is still in style today.

Nawal's arrival on the scene was inadvertently synchronized with the birth of a new and very effective promotional medium in the Industry, the Music Videos

The duo, Mirna Khayat and Tony Abu Elias, embraced the beautiful Nawal to create some of the most colorful and vibrant clips of that time. With her modern and fresh image, Nawal became the muse at the heart of this new dynamic undertaking.

In the years that followed, Nawal launched 14 other successful albums, and shot 28 music videos with the best directors in the Industry including Nadine Labaki and Yehya Saade. [see full discography].

However, for a short period of time and at numerous occasions, Nawal would go into a latent state of observation to assess the music scene and fine-tune her position. She would take tentative and very controlled steps, often completely disappearing . This was notable with the wave that brought in new faces such as Haifa Wehbe, Maria Elaab, Dana Halabi, and many others.

An amusing incident occurred in 1998, when another artist Houwaida(a struggling Syrian singer) argued the ownership of one of Nawal's songs "Mandam Aleik" and released the same track! She tried to ride on Nawal's popularity, but naturally remained in the shadow of what became the Queen of Arabic Pop.

For a long while, Nawal al Zoghbi also fostered a bitter name-calling relationship with rival Syrian singer Asala Nasri. After the jealous Asala had accused Nawal of "singing with her dresses", the elegant Nawal retaliated and described Asala's voice as a "danger siren"!

Nawal frequently does vocalise exercises to stay in shape "I always practice on my voice training. I take vocal lessons and perform voice exercises at least four times weekly. I think this should be a priority to every singer".

Nawal's patriotic spirit has lead her to release a song dedicated to Jerusalem. "I have strong feelings towards the relentless violence in the Middle East, I felt the need to do something, so I made this song," she once said.

Nawal performed at a party in Cairo sponsored by First Lady Suzanne Mubarak, and the guest list included many of the wives of Arab leaders and many generous donations were extended during that event; The ticket revenue of the concert was put towards the Intifadah.

Nawal also participated in a group patriotic song called "Ya Omati" along with other singers from the Arab world. Nawal also sang for the liberation of South Lebanon with several Lebanese singers, in a song called "Hikayt Watan" that mostly aired on LBC.

Her priorities are her Family and Music.

Help us improve this page:   Correct or update the Nawal El Zoghby page