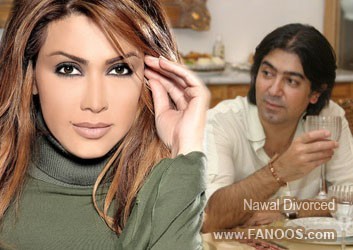 
Famous Lebanese Diva singer, Nawal El Zoghby has officially announced in August 2008 that she and her husband broke up.

Nawal El Zoghby got married to her Managing Director Elie Deeb in 1988, at that time Nawal was only 18 year old. Elie was Nawal only love that has occupied her heart and mind since she was a teen ager.

Nawal El Zoughbi and Eli Deeb marriage that lasted around 15 years. Nawal has three children from Elie, their first a daughter, named Tia Deeb born in 1998 and twin boys Georgy and Joey born in the year 2001.

A year prior to the official divorce, rumors spread that Elie had strongly opposed to some scenes from Nawal 2007 clips for the songs Aghla Al Habaib and Shu Akhbarak, in which Nawal El Zoghby and lebanese male model, Saleh Abdul Nabi, acted some intimate scenes.

Apparently Eli Deeb expressed his jealousy about those clips.

Soon after Nawal started with the divorce process and has left her home and to go and live with her parents.

Some other rumors said that Nawal found out that Elie had betrayed her by using the power of attorney she gave to him over all her assets. He placed a large sum of money in his personal bank savings, which made Nawal very angry.

Nawal kept quiet about the divorce for few months, until she officially talked about it in public.

Nawal is expected to record a duet song with an international male singer.