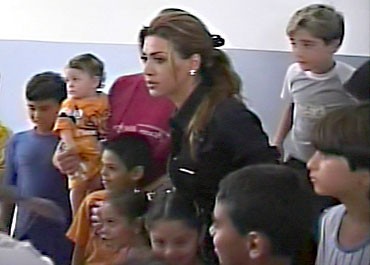 Thats what makes Nawal Zoghby so Much Different

As the Israeli war on lebanon was escalating in july 2006 and while singers from Lebanon and the Arab world were rushing out of Lebanon or rushing into recording studios to prepare patriotic songs for Lebanon, Nawal was rushing somewhere else.

Nawal who refused to leave Lebanon, knowing that she has a Canadian passport, was the first Arab singer to send out a cry of help to her fellow singers and artists to support the helpless and displaced in Lebanon.

Nawal El Zoghby started by visiting few schools in Lebanon, in Zalka and Jal El Deeb, where families took refuge from the south of Lebanon and the Dahieh.

Nawal El Zoghby with the full support of her fanclub members started a Help Lebanon Campaign to support the victims and displaced.

The campaign aims at reaching out to all those helpless people dwelling schools and parks in Lebanon, providing them with food and medicine.

Help Lebanon campaign also aims at collecting donations to help all the victims of this horrible attack on Lebanon in order to get them back on their feet and in their homes.

Nawal herself, participated through donations and personal visits to schools many times.

Nawal truly believes that patriotic songs and charity concerts can be done after the war is over.

After spreading a computer virus in her latest videoclips, nawal el zoghby is now spreading something else.

This time she is spreading a human feeling, a personal touch, her own way of telling Lebanon and the Lebanese... I love you

Help us improve this page:   Correct or update the Thats what makes Nawal Zoghby so Much Different page