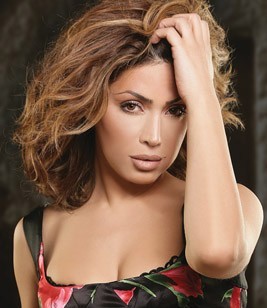 
The ever changing Nawal El Zoghbi keeps on hanging in there, despite all the new trends in the music industry. It could be true that 'The early bird gets the worm' seeing that she got her fair share of stardom alright. But she also had to bravely absorb all the negative commentaries and influences, which obviously made it much easier for her successors later on.

From sweet, to sexy, to sassy, to the girl next door look, she has tried it all. One would think that after all those long productive years she would have lost her energy by now, but nothing to it. Her frequent concerts, including in prominent festivals, are clear proof that she is still in demand. TV programs still work hard on snatching an exclusive interview or participation, which is guaranteed to draw in valuable commercials.

Her songs were often experimental also, always wanting to present something new and innovative. After Sabah, she was the only Lebanese female singer accepted or shall we say admired in Egypt. She was the first to take the Khaligi songs to a higher more popular level across the Arab world, when people were still not used to those exotic sounds and percussions. Her videos seemed so modern and fresh back then. The funny part was that some saw her as provocative! Nawal was definitely a trend setter and everyone wanted to look like her. Any minor changes in her features were exposed as scandalous or a disputed manipulation of god's creation.

Her original yet effective voice, although not Oum Kalthoum-like, also faced tremendous critic. The jealous ones often regarded Nawal as 'the dress singer'.

She was also the first Arab artist to have her own fan club, still by far the most active and organized group today.

Then Haifa came into the picture and suddenly the words provocative, plastic surgery and vocal abilities had a new meaning ;) Serves them right! (Not that we have anything against Haifa; we love her too)

Do you think Nawal still has her place on the music market today?

Help us improve this page:   Correct or update the Nawal El Zoghbi - The Chameleon Lady page