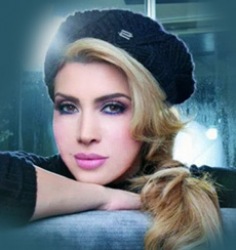 
Nawal Al Zoghbi new song for 2013 entitled "Garibeh Hal Denieh" (Life is strange) was released on Friday the 8th of February 2013. The song was written by poet Ahmed Madi and the music has been attributed to a Turkish melody which was distributed and arranged by Roger Khoury.

The song was launched officially and exclusively on Melody. When it first aired, the station received many calls on the radio to congratulate Nawal. It was a the special moment, fans were waiting for. A strong return to the singer, all the fans danced to the tune of the song.

One fan said on-air: "Any music with Nawal voice on it, will be a hit no matter what. She knows how to choose songs, and the music in this song is different from all her previous songs; She is truly outperforming herself every-time."

Initially it was heard that the lyrics were written by Nizar Francis and the music composed by Samir Sfeir, but later Nawal confirmed that the lyrics are by Ahmad Madi with music from Turkey.

Nawal worked with director Jad Choueiri on producing a video clip for "Garibeh Hal Dineh". She stressed that the release of the video clip will be exclusively on YouTube, then will be followed on Melody and other TV channels.

It is said that Nawal got the idea of the clip and was inspired from the Turkish series "Harem Sultan". This was revealed on Sunday the 10th of February during the TV program "Habayeb" which airs on MBC. The original dance from the Turkish drama was performed by "Huyam" in the first part of the series when all the women danced in-front of Sultan Sulaiman. This news was also published by some magazines from the Gulf. The clip itself includes a great dance performance by Nawal and other dancers. The dances were choreographed by famous Lebanese dance choreographer Charles Makriss.