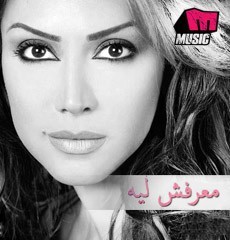 
Maarafsh Leih or Ma3rafsh Leh is Nawal el Zoghbi's 2011 new album. The songs were leaked out on the internet, before the official launch of the album which is expected very soon!

In the last week of January 2011, Melody Radio started broadcasting small parts of Nawal El Zoghby's new album 2011, which will carry the title Ma3rafsh Leh (I do not know why).

Melody mostly aired the song "Ha2olak Eh", possibly the lead track on the new album. Nawal Fans also started promoting the song through Facebook, and they announced that her album will be issued within ten days at the most. The new album is expected to be in stores during the first or second week of February 2011.

Nawal 2011 Album contains 12 new songs. In this album, Nawal collaborated with a group of poets, composers, distributors, both Lebanese and Arabs.

You will notice however a big resemblance between some of her new songs and her earlier successful tracks. For example, Ya Rayeh reminded us a lot of 3al Dal3ouna. Goulaha is more of the Khaliji songs Nawal has mastered over the years, and has helped to make popular throughout the large Arab World.
There seems to be a trend lately where Arab female singers make fun of the macho middle eastern man (including Nancy Ajram); Nawal gives us here in that same concept Alf We Meyeh.

The lead track Ha2olak Eh is a nice electro Arabic pop song. Nawal has already shot it as a music video clip under the management of director Jad Choueiri, with whom she is collaborating for the first time. Other songs from the new album are also expected to be shot as music videos.

It is worth noting that an Egyptian singer, Zena singer, also has a song called Ma3rafsh Leh from her 2008 Album Ba3sha2 Hawak.

Nawal New Album Leaked Out: On the 24th of January 2011 and after a special Interview with Nawal on Radio Melody to promote her upcoming album, the full album was unfortunately leaked out on the internet, ready for download! This event will for sure cause a lot of harm to Nawal, especially that she has been away for a long time preparing for her come back.

Fanoos takes this opportunity to remind all our valued visitors that while they can listen to all the 12 new songs at our Nawal online radio stream, the songs are not available for download or sharing. Fanoos, as always, encourages all visitors to respect the artist by buying their original CDs from official music stores.


In the end, The Fanoos Team would like to congratulate Nawal on her new album, wishing her all the success.

We ask the public to share with us their views and thoughts on the new album. What do you think of Nawal's new songs for 2011, and her collaboration with Melody as a production company, after she ended her contract with Rotana?

Also make sure you vote for this album on our star rating system.