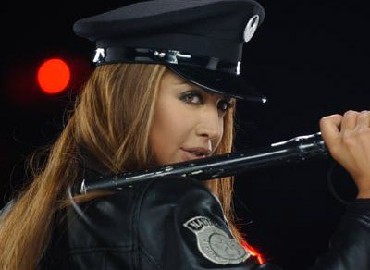 
A new video clip of Lebanese singer Nawal El Zoghby for her latest song ‘Yama Alou’ will be released soon.
The video clip story-board runs around nawal getting into trouble with the lebanese security forces, Nawal plays the role of a computer hacker, She spreads a virus into the control panels of electronic screen boards in the beirut streets, and sends the same virus from her phone to the mobile phone networks accross the country.

The viewers of the song, liked it so much to the extent that they all gather to defend her from the police who tries to arrest her for her crime.

The video clip was directed by famous videoclip director, Randa El Alam. This is her second collaboration after their latest video Shou Akhbarak.

The Yama Alou videoclip was shot in two days around the mid of june 2006 with famous director Randa El Alam.

It is expected that the album will finaly be released on the 17th of July 2006 by Alam El Fann record company.

The upcoming work is Nawal's 12th album and will also contain 12 songs.

Ten songs from the new album are brand new, in addition to two old singles: Rohy Ya Rohy, released last summer and Shu Akhbarak, released at the beginning of the this year.

Habibati Man Takoon will be a bonus track on the new CD and shall not be released on the cassette version of the album.

During her last visit to Egypt, Nawal met with producer Mohsen Gaber and discuessed her new album marketing plans, which started in Egypt through Mazzika TV, in addition to huge outdoor posters in the streets of Beirut and Cairo.


Help us improve this page:   Correct or update the Nawal El Zoghby escapes from the Lebanese Security Forces page