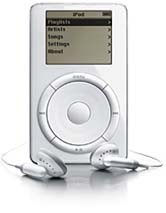 The original Apple iPod was first introduced by Apple and launched in 23 October 2001 Both Apple and iPod broke a new ground in the portable MP3 player technology when they introduced for the first time in history what is called the Scroll Wheel to navigate the menu of songs. iPod combined a small hard drive, a Scroll Wheel menu controller, and a simple operating system originally designed for mobile devices and based on the Pixo OS 2.1, and sophisticated Mac software to manage your MP3 songs which they named iTunes.

iTunes was based on SoundJam software which was invented to manage one's music collection between the Mac and the iPod.

The iPod original features a high output amplifier of 60-mW, a FireWire port to connect to your PC or MAC. The first ipod came with a standard 3.5-mm headphone jack stainless steel case.
The original iPod had a 2-inch backlit LCD screen.

The first iPod Battery life was estimated to be 10 hours to full running.