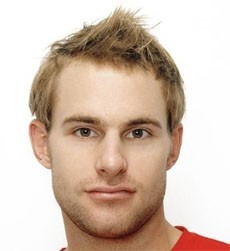 Andy Roddick is a famous American tennis player. He is a former World Number 1 Tennis Player.

His full name is Andrew Stephen Roddick and he was born on the 30th of August 1982, in in Omaha, Nebraska.

In the year 2003 and during the U.S. Open, Andy Roddick became a Grand Slam singles champion when he won the title.

Roddick was on the victorious United States Davis Cup team when it won the 2007 Davis Cup. Roddick defeated Dmitry Tursunov of the Russian Davis Cup team, the defending champions, in the finals.

Andy has two brothers, Lawrence and John Roddick, who are elder to him, and who both were good tennis players when they were teenagers.

In the year 2002, Roddick started dating the singer Mandy Moore, then later he stopped his relationship with her in March of 2004.

During the year 2008, Roddick announced that he and American fashion model Brooklyn Decker are engaged and will get married in the spring of 2009.

Help us improve this page:   Correct or update the Andy Roddick page