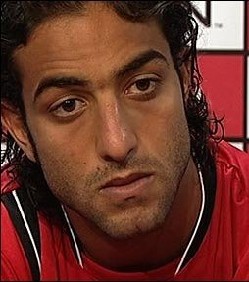 Ahmed Hossam Hussein Abdelhamid was born on February 23, 1983. He currently plays for the Amsterdam Football Club Ajax Netherlands, as a striker.

Mido also plays for the national football team and is also an Egyptian Premier League Zamalec club player, often renewing his contract with them. Due to lack of chemistry with Coach Hassan Shehata however, Mido frequently finds himself out of the squad!

Mido has earned 51 caps for Egypt!

Help us improve this page:   Correct or update the Ahmed Hossam Mido page