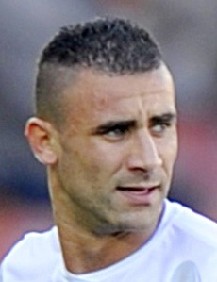 His full name is Abdelkader Mohamed Ghezzal; He was born on the 5th of December 1984 in Décines-Charpieu, Rhône, France.

Ghezzal currently plays as a forward for A.S. Bari in the Italian Serie A.

Abdelkader jumpstarted his career with several minor league clubs in France. In 2005, he relocated to Italy to join Crotone, where he managed to make his breakthrough to the higher level by scoring 20 goals in the Serie C1/B 2007–08 season, guiding his club to promotion to Serie B.

During the FIFA World Cup group stage which took place in June 2010, Abdelkader was brought on as a substitute in a match against Slovenia, but was subsequently sent off for two yellow card offenses within the first few minutes of the game.

Help us improve this page:   Correct or update the Abdelkader Ghezzal page