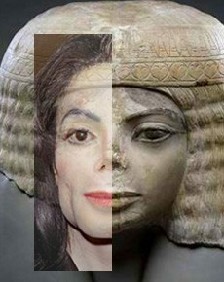 A 3,000-year-old Egyptian bust on display at the Chicago's Field Museum shows a striking resemblance to the king of pop Michael Jackson. Complete with a disfigured nose, the photocopy limestone Egyptian sculpture which has been on display since 1988 is attracting a lot of visitors who swear it is Michael. Could Michael have been an Egyptian Pharaoh in an earlier life? It is rather baffling, especially since Michael would often adorn himself with Egyptian inspired accessories and outfits. The bust, which was carved sometime between 1550 B.C. and 1050 B.C., is actually that of a woman.

Some believe this could be a hoax, given the convenient timing of such a media outbreak only weeks away from the one year anniversary of Michael’s departure. It is rather a weird coincidence that an Egyptian bust bearing a striking resemblance to the King of Pop would opportunely manage to just turn up like that.

Others suggest it is more likely to have been restored by a clumsy incompetent apprentice. A diehard fan maybe?

Whichever is the case, the situation is all quite intriguing. So have a look at the photo, what do you think?

Help us improve this page:   Correct or update the Pharaoh statue looks like Michael Jackson page