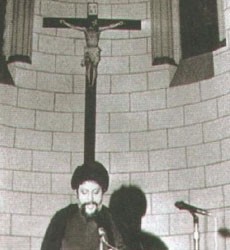 Many believe that Imam Moussa El-Sader is still alive, held in a secret prison in Lybia.

Hizbollah Secretary General Sayyed Hassan Nasrallah had previously said in a speech that the prominent Shia cleric Imam Musa Al Sadr and his two companions are “alive and in custody in Libya.”, and called for his immediate release.

Imam Moussa al-Sadr was kidnapped during an official visit to Tripoli to meet with officials from the government of Libyan leader Muammar Al Gaddafi in August 1978. He is believed to have been abducted on the orders of senior Libyan officials.

In 2008, the Lebanese government actually issued an arrest warrant for Gaddafi over Sadr's disappearance.

Libya has always denied involvement, ignoring calls for more information on the case, saying that the three men left for Italy on August 31, 1978 after their stay. Investigations in Italy assured they never made it into Italy.


So how old would Imam Moussa Sader be if he is still alive indeed ?!

If still alive, Al Sader would be well over 83!
Skeptics question this unrealistic thought, as why would anyone keep somebody alive all this time if their initial objective was to make them disappear and not trade them for another prisoner or get a ransom.

Still for the past 3 years, many sources from Libya have been stating that Imam Moussa Sadr is still alive in an underground cell somewhere in Libya.

On 21st Feb. 2011, during the Libyan awakening movement against the dictatorship of Gaddafi, the Libyan opposition activist Mr. Sami Al Masrati reported that Imam Musa Al- Sadr was still alive. He added Eyewitnesses have seen a man resembling Imam Musa Al-Sadr transferred in a small aircraft to an unknown destination. The Libyan opposition leader and the founder of Tabo Tribal Liberation Front Essa Abdulmajeed Mansoor had also previously mentioned that Imam Musa Sadr is still alive and was seen in the jail of Sabha.

Some believers even put forward old prophecies to prove they are not delusional.
In the Book of Imams Statement Page 512
the faithful Imam Ali was reported as saying: "Wonder all the wonder, when in the wonderful land of Algeria, shows up the missing one on the hill(from a prison in the Tel) owner of victory ( the land of Algeria refers to countries of the Maghreb)."