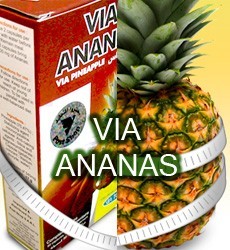 Via Ananas are slimming capsules or diet pills, which are not considered as medicine but rather a food supplement made mostly from Pineapples. Via Ananas has become widely popular in the Middle East especially in Lebanon, Syria, Jordan and the UAE.

Via Ananas popularity came to being after its advertisements played repeatedly on Satellite TV channels such as Al Jaras Television, Masaya Television and others.

The makers of the product recommend taking two Capsules daily with water before the main course meal.

According to the producers of the Via Ananas Marketing website the contents of the pills include: More than 75% of Pineapple, in addition to a stabilizing agent called polycrystalline. In addition to Cellulose; Anti Caking agents: Silica and Magnesium Stearate which is made by hydrogenating cottonseed or palm oil, are used throughout the supplements industry as lubricants to help the pills flow faster during the manufacturing process.

In Syria, especially in the city of Halab, the pills seem to have created a Hype, as many young men and women who got affected with the advertisements decided to use the product to reach those model-like figures which were used for the promotion of the TV-Ad.

While there is no scientific proof that the pills do or do-not work. According to Medical Doctors and Health nutrition experts, most of such diet pills work by curbing (stopping) the appetite so that you eat less and lower you calorie intake.

Few people in Syria experienced some side-effects such as rashes around the neck or the appearance of large pimples on the face or neck. Some bad side effects of taking such diet pills range from heart problems, seizures, irregular heartbeats, increased hair loss, nervousness and even high blood pressure.

Eating Less food is generally not the solution because this will lower your metabolism rate and make it harder to burn the extra fat in your body.

Did the pills work for you? Did you experience any of the side effects mentioned above? Let us know your experiences with Losing weight after using Via Ananas Pills. Share your thoughts about the Via Ananas Slimming product. Also do not forget to RATE the Via Ananas Pills by giving this product the Stars you feel it deserves.

Help us improve this page:   Correct or update the Via Ananas page