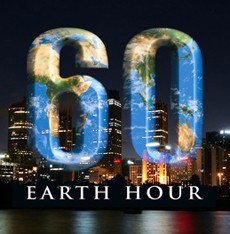 A call from the WWF to all people, organizations and businesses around the world to turn off the lights and electricity on the 27th of March 2010. It is Earth Hour and the world has to show some action towards climate change.

Earth Hour began in the year 2007 in Sydney, Australia when more than two million homes and businesses turned off their lights for 60 minutes to say something against climate change.

In 2008 Earth Hour became more international when 50 million homes in more than 30 countries took part in this stand.

Earth hour is not just turning off the lights for 60 minutes every 525,600 minutes (365 days) it is more of a giving humanity a voice to save our planet and to work towards a future with lower carbon.

Research indicates that Planet Earth has until 2015 to initiate a low carbon industrial revolution before it is too late.

If we do not act right now, the inevitable will happen and we will never be able to go back.

Let us take a stand today and give our world leaders the push they need to make the right climate change decision.

Remember it is not just 1 hour per year, it should be a life style; let us consume less power and save our planet before it is too late.

Help us improve this page:   Correct or update the Lights off Earth Hour page