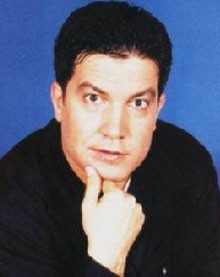 Zahi Wehbi also spelled as Zahi Wehbeh is a unique TV Personality. Zahi followed his dreams, poetry and life and today he is one of leading names in Television in the Arab world.

Zahi Wehbi has his own long story that led to him being the man he is today, Zahi had a cruel childhood with echoes of death and destruction during the civil war in Lebanon.
All those events shaped him with a rich personality and lead to his stardom on Televison.

The love of his country, led him to the Israeli jails while he was only 17 years old. In those cruel jails the teenager became a mature man, having a clear and strong sense of what freedom really is.

Zahi became a politician, a poet and a TV show host, yet he was and still is simple and straight forward man.

Zahi wehbi has his own Show about literature, poetry and life on Future Television.

His Show Khaleek Bel Beit also spelled as Khallik Bil Bayt was a major program on the Television, as he hosted big names in the Arab World.

It is well known that Zahi Wehbi respects his guests and his viewers alike and with limited resources he was able to make out of a simple TV program an awaited show that for millions of viewers from around the world.

Help us improve this page:   Correct or update the Zahi Wehbi page