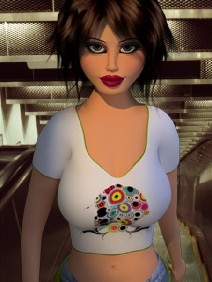 Yaya Yay is a virtual humanoid celebrity singer from Lebanon.

Yaya is the very first virtual Humanoid 3D computer-animated celebrity in the Arab World! She works closely with her General Manager Stephanie Farhat, her booking agent Alain Sawaya and her PR Alain Nasnas.

Check our exclusive interview with her under First Arab Virtual Humanoid Celebrity.

Yaya is like the virtual alter-ego of Hayfa Wehbeh…her official website is actually called Ana Yaya, alluding to Haifa’s famous Ana Haifa! Her website seems down at the moment though. The sexy Yaya has so far released one hit single called Yay, which was also shot as a music video. It was a co-production of Aswat Lab(Concept Creation) and BAN (Beirut Animation Network)Animation Studio.

Yaya also apparently has her own hair dresser, Charbel Harbouk!

Yaya also got to do a few radio and Television commercials for BoumBoum and a Juice brand.

Background of Yaya:
Yaya was born on 15 November 1988. Daughter of a Lebanese industrial and an Egyptian mother, she spent her early childhood in Lebanon.
She lived between France, Switzerland and the United-States, which gave her the opportunity to study in the most prestigious schools.
But Yaya is so passionate, she only had one dream, she wanted to sing. When she graduated, she came back to Lebanon where she met Alain S. and Stephanie F., two professionals in the music industry, who believed in her and decided to take care of her and her carrier. Then, she recorded her first single, «Yay!!» written, composed and arranged by Alain S.

From the first broadcast of Yaya’s single, she imposes herself like a rising star in the Middle Eastern music. This impact is in part due to the production of an extremely professional and innovative video clip, achieved by Alain Nasnas (director and his team).

In this process Yaya is also working on the making off a great album based on an original fusion, which allows to discover a new artistic wave. But the adventure his not ending there, Yaya has still a lot off surprises to come, which are going to be more and more innovative.

Help us improve this page:   Correct or update the Yaya Yay page