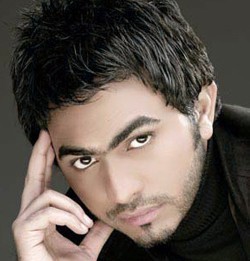 Tamer Hosny (also known as Tamer Hosni or Tamer El Hosny) is a famous young Egyptian pop singer. Tamer Hosny is also an actor who has been active since the late 90s.

In 2003, his debut picture In A State of Love, became the biggest hit of the year.

In 2004, Tamer Hosny released by EMI his first album for the international market entitled Hob (also known as: Houb)

Born on August 17th 1977, Tamer was born to a Syrian mother and Egyptian father in Cairo, Egypt. In 2002, he was signed onto Free Music with then-unknown Shireen.The two recorded an album together, and the album was released. The album became a best-seller.

Tamer Hosny has appeared on TV, in films, and is active writing and in producing for other artists.

In 2011, Tamer Hosny was denied entry to the Tahrir Square, where demonstrators gathered for more than a week fighting for the end of Hosni Mubarak's corrupt regime. Tamer had previously made pro-Mubarak statements, and the protesters felt he was trying to cash in on their achievements in the last moment right before their victory. A video later circulated on the internet showing Tamer Hosny crying like a baby, and humiliated by the situation he put himself in.
See Tamer Hosni kicked out of Tahrir Square .

Tamer Hosny Pleasure
To see his Mom and her nice smile.
When his fans clap for him in his concerts.
After praying.

Tamer Hosny Private Life
Tamer Hosny has a brother named Hossam Hosni, Who is married and has a girl named Salma. Tamer mom is Syrian but she was raised and lived her whole life in Egypt. His dad is Egyptian.

Tamer Hosni is Single. However Two years ago, he was engaged but later on he broke up under pressure.

Tamer Hosny Negatives and Thoughts
Very nervous, He drives his car so fast knowing that it is not acceptable.
As a man, Tamer has feelings of Jealousy , which is is a big part of his character, his manners are typical Upper Egypt Man.
Tamer Hosni is a Kind and a Loving person, he loves all people around him. Tamer is crazy about his love to his mom because she gave up her life and everything for him. Tamer lives for his mom, dad, his brother and any one who loves him.

Tamer dad left him 19 years ago and he never seen him since then, but after Tamer became famous he searched for him. He found him in London, so he mailed him and brought him back to Egypt.

Tamer Hosny Friends
Every one who shares in making m a better person such as Mohamed Fouad the drum player known as Mimi, Hady Adel, Ayman Azmy the lyrics writer and my dear brother Hossam Housni who taught me everything.

Tamer Hosny Childhood
Tamer lived a very hard childhood because he was lonely and had no financial support due to his dad's absence and his mom was far away from her homeland and family. With patience and strong believe in God his life went on. Then he met the star creator and the producer, Nasr Mahrous whom he considered as his older brother. Naser Mahrous changed Tamer whole life and filled in the gap which his dad left.

Tamer aspires for a wife with High manners, kind, tender, cute, low voice, good listener. She should take good care of her self and of Tamer. Tamer believes that a good relation should be built on respect, care and love. Tamer adimits that he hates make up and he preferes the natural look of a woman.

Characters who Affected the life of Tamer Hosny
Nasr Mahrous, Salma El Shamaa and his Mother

Salma El Shamaa heard him first and presented him to the Opera then Nasr Mahrous heard him and took care of him and helped him start his singing career in a professional way.

The Song which affected his career is Ana Lak Ala Tool it is the song which made him love singing.

Singers which affected Tamer singing career include Ali El Hagar, Medhat Saleh and others.
Tamer Hosni Mom Taught him everything even from good manners to love.

Tamer Hosny Dreams
1. World Peace and a way to Gods love and heaven.
2. Curing Sick People and Peace of mind to those poor people.
3. Making his family and brother happy.
4. God's love and support to fulfill his goals and dreams.

Help us improve this page:   Correct or update the Tamer Hosny page