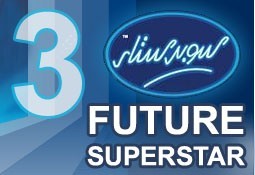 The broadcast of SuperStar third season was delayed due to the assassination of Future TV Founder and Lebanese Prime Minister Rafik El Hariri.

Rania El Kurdi did not want to renew her hosting position for Season three, as a result she was replaced with Heba Al Sisi.
However, due to the hiatus over the Hariri scandal, Heba Sisi contract prematurely ended before the semi finals had even begun. All this left Ayman to host solo for the rest of the season.

For season three, 94 contestants advanced to Beirut. 21 from Lebanon, 6 from America, 4 from Australia, 8 from Egypt, 5 from Jordan, 9 from Syria, 32 from Tunisia and 5 from United Arab Emirates.

On January 15 2006, the competition was once again postponed due to the passing of another key political figure, Jaber Al-Ahmad Jaber Al Sabbah. The performance show was recorded on Tuesday and then it was aired on Thursday January 19th. The votes from this round were combined with the performance show on January 22 with the elimination of 2 contestants.


Special guests of SuperStar 3
in the third season, special guests have been invited to offer their support and critiques.

Help us improve this page:   Correct or update the SuperStar third season page