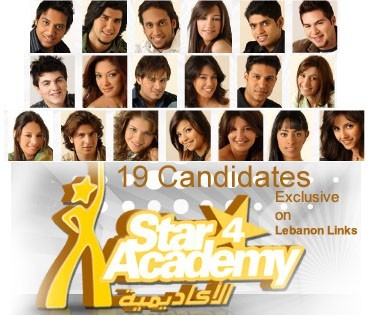 Star Academy 4 Lebanon was launched on the eve of the 15th of December 2006. The fourth season had the number of students increased totaling to 10 girls and 9 guys from most of the arab countries. The Students ages range from 17 to 25 years old.

It is surprising that this season Star Academy does not have any candidates from Syria, Jordan or Qatar. I can think of many reasons why Syria was not included in the list of countries but I would have loved to see a candidate or two from Jordan or even Qatar.

To all the candidates out there we do wish you all the best of luck and wish that this season will not be interrupted by any political events as was the case with Star Academy 2 and 3.

Help us improve this page:   Correct or update the 19 Star Academy Students for the fourth Season page