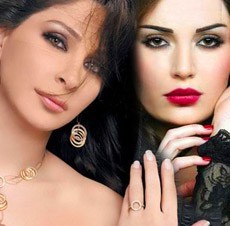 After Elisa turned down the offer, the organizers of the yearly event “Sham El Nessim” in Alexandria Egypt sought after Cyrine Abdelnour as a substitute.

It was rumored that Elisa prestige supposedly forbids her from sharing the spotlight with other (perhaps less esteemed) Egyptian singers, and as a result have the same Egyptian crowd compare between them.

Other expected “guest -stars” include Sandy, Hamada Hilal, Shaza, and Mohamed Kamel. These rumors, which unsurprisingly came out of Egypt, simply reflect the degree of threat this lady has been causing to the local artists; anything to make her look bad. But on the other hand, these rumors could also be well grounded!

Is anyone unaware of Ellissa’s rampant ego?! Elissa alongside Sandy is a definite nono, thank you very much...What were they thinking?

Whichever is the case, Cyrine will be off to Egypt on the 4th of April to host the event. While there, she will also cease the opportunity to start working on a new Egyptian TV Series, which is expected to air next Ramadan.

Help us improve this page:   Correct or update the Sham El Nessim page