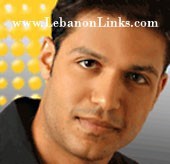 Khaled Fardan also known as Khalid Fardan is a Star Academy 4 Candidate from Bahrain. Khalid Fardan was born in 1985. Khaled loves to play the guitar and flute.

Khalid is in touch with nature, from which he gets his creativity to compose music and write beautiful lyrics of songs.

Khalid love camping and outdoor sports. Khaled Fardan is a multi-talented artist; his participation in star academy will give him the chance to prove it to the world.

Help us improve this page:   Correct or update the Khaled Fardan page