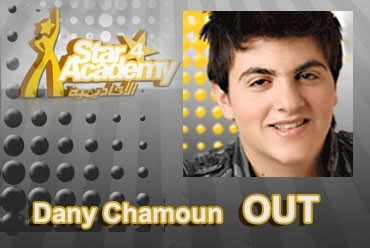 By the end of the eighth prime of star academy 4 which took place on the 2nd of February 2007, Presenter Hilda Khalifeh announced the results of the audience votes.

The students selected Abdul Aziz from Kuwait to stay with them, and so it was time for Dany Chamoun to leave the Academy on its eighth prime. It is good to note that only Carlo Nakhleh and Tina Yamout from Lebanon and Sally Ahmad from Egypt voted for Dany. All the rest selected Abdul Aziz.

Dany also had a few words to say to everyone who voted and cared for him. It was nice and very touching of him to say it.

Abdul Aziz Al Aswad took a very offensive reaction towards the Lebanese Students for standing by Dany. We think that Abul Aziz deserves to be out of the Academy in the next prime. He is not worth the title, his character is not up to a gentleman. Did everyone notice how he was wrapped with the Kuwait Flag and by the end of the Prime he threw the Flag out in the air, it was a bad move Azouz, and it gives us an idea about your character. I do not think that anyone should vote for him anymore.