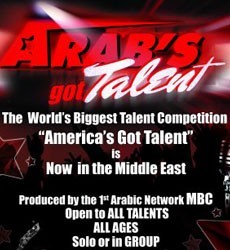 Arab's Got Talent is a TV Talent show produced by Imagic Productions for MBC in the Middle East, along the same spirit as America’s Got Talent .

Arab's Got Talent is the Arabic version of the popular American show America’s Got Talent. The concept has been reworked from previous versions, and follows a long list of re-adaptations including America, Britain, France and Australia.

Arab's Got Talent gives an opportunity to talented amateurs or unknown performers in all fields (comedians, acrobats, clowns, singers, dancers, magicians, etc. ) to compete for the final cash prize. They first audition in front of the judges, for the preliminary results. The final winners are however determined by the audience votes.


The panel of judges in Season 1 was constituted of Najwa Karam, Amr Adib and Ali Jaber!.

The winner of Arabs Got Talent Season 1 was Amr Katamish from Egypt.


Another performer that made it to the finals was Johnny Madness.

The organizers of Arabs Got Talent held their first auditions for interested candidates as follows:

After an unprecedented success of “America’s Got Talent”, “ Britain’s Got Talent” “ La France a un Incroyable Talent”, this unique competition now comes to the region showing that “Arabia’s Got Talent!”

Imagic Productions is presently producing the biggest televised Talent competition in the Arab region, to be broadcasted on the #1 Arabic channel MBC.

For the first time in the Arab World, all types of talents and performing arts are welcomed on stage for a fierce competition and a Grand Prize awaiting the lucky finalist.

Acrobats, comedians, contortionists, magicians, dancers, singers, musicians, animal trainers, circus artists, and more are all invited to show the best they've got right on our stage in the upcoming auditions. The auditions will be held in 9 different cities Beirut, Damascus, Jordan, Bahrain, Abu Dhabi, Cairo, Casablanca, Marrakech, Tunis, and we are looking forward to meeting the best performers on stage to compete in this internationally-claimed talent show.

DON'T MISS YOUR CHANCE! In case you cannot meet us in the listed cities for auditions, make sure to register online www.mbc.net/gt where you can check your local casting schedule as well. Also, do not hesitate to spread the word around you and encourage great talents such as yours.

Kindly note: the performance must not exceed 2 minutes. The competition is open to All Talents, All Ages, Solo and groups. If you think you got what it takes, we'd love to see you there!!!!


See you at the Auditions!!!

Help us improve this page:   Correct or update the Arabs Got Talent page