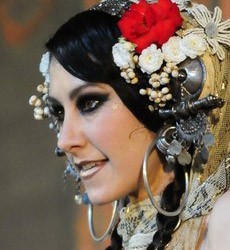 Rachel Brice is a famous American belly dancer and Yoga instructor, leader in the serpentine Tribal fusion style of bellydance.

Rachel Brice was born on June 15, 1972 in San Francisco, California. She originally started by studying Yoga and training with Erich Schiffmanin in 1988. She discovered belly dance at the Northern California Renaissance Faire where the famous HahbiRu
was performing. Soon after, Rachel began taking dance classes with Atesh, director of Atesh Dance Troupe, and perfected her belly dancing by watching and imitating videos of Suhaila Salimpour. She also learned from Jill Parker and Carolena Nericcio (pioneer in American Tribal Style Belly Dance)...She also studied Dance Ethnology at San Francisco State.

Rachel Brice currently gives workshops all over the world, especially in the US and Europe. She has been teaching Yoga and belly dance since 1996, and has also released many instructional videos and DVDs.

Help us improve this page:   Correct or update the Rachel Brice page