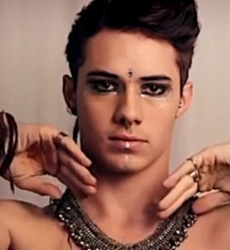 Illan discovered Tribal belly Dance at 11 by watching video performances of Rachel Brice, which led him to take on Tribal dancing classes to improve his technique. He then trained with many leading artists including Sharon Kihara, Anasma , Mardi Love, and of course Rachel herself.

He later joined Louis Liard High School in 2008, in Falaise (France), with a major in dance, where he got acquainted with a myriad of dance forms showcased by choreographers such as Dominique Duszynski, Jean Marc Piquemal , Jean Guizerix, Dominique Jegou and others. This is why Illian mixes moves from African dances, Contemporary dances, and ballet into his belly dance style.

After winning first prize in Germany at the Hannover Festival, he went on a trip to Tribal Fest in Sebastopol, CA, USA, where he performed on stage.

Illian Riviere is one of the few Male Belly Dancers that succeed in proposing an alternative form to the mostly emasculating feminine belly dancing.

Help us improve this page:   Correct or update the Illan Riviere page