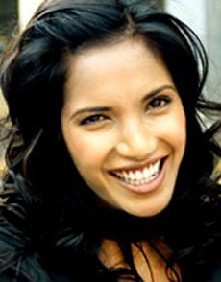 Her full name is Padma Parvati Lakshmi, also known as Lady Rushdie was born on the 1st of September 1970.

In the year 2009 Padma Lakshmi got nominated for an Emmy Award for her performance in being a host of the TV program Top Chef opposite Tom Colicchio.

Help us improve this page:   Correct or update the Padma Lakshmi page