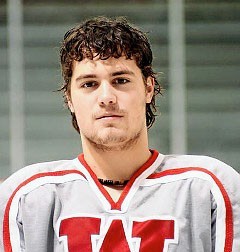 Levi Johnston is the most famous high school hockey player in the world, and the father of Bristol Palin baby. Levi Johnston was born in the year 1990 in Wasilla, Alaska.

Levi Johnston was dating Bristol Palin, daughter of the Republican vice presidential candidate Sarah Palin's. Levi Johnston got Bristol pregnant, which created a lot of stir in the media.

Levi Johnston was just a 17 year old hockey player at Burchell High School in Wasilla, Alaska. He describes himself as redneck who likes to snowboard and ride dirt bikes. On his MySpace profile Levi Johnston stated that he likes children but not his own, he is not ready to be a father. However due to the current circumstances, Levi Johnston soon to be married to the Republican vice presidential candidate's daughter.

On his Myspace profile Levi Johnston added that he lives to play hockey. He wrote "I like to go camping and hang out with the boys, do some fishing, shoot some sh*t and just f**kin' chillin' I guess. Ya f*ck with me I'll kick ass."

Levi Johnston admits that he is in a relationship with Bristol, but he still says that he wants to use MySpace "for networking or for dating."

Their baby is due in four more months so the wedding ceremony and marriage can not be delayed longer.

In an official statement made by Sarah Palin and her husband, they confirmed that the young couple (Bristol and Levi) will marry very soon.

On the 19th of December 2008, Sherry Johnston, Levi Johnston mother, and the future mother-in-law of Bristol Palin, was caught on drug use.

Help us improve this page:   Correct or update the Levi Johnston page