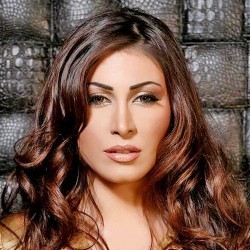 Yara's real name is Carla; her stage name and her new look were also given to her under the patronage of her producer Tarek.

Being his protegee, he composed most of her first singles, including Hob Kbir. Yara’s debut album, Twasa B Albi (Take care of my heart), was launched in 2005.

Yara's strong breakthrough came in 2006 on the hands of a duet with Fadel Shaker, called Akhedni Ma’ak. It proved to be a success and became a hit.

In the year 2008, Yara released her album Inta Minee (You are part of me) which was produced by Melody production.

Yara is known for her romantic songs, lots of imagination and fantasy.

The song 'Inta Minee' was made into a video clip, directed by Leila Kanaan and was shot between Tripoli and Jumayzeh in Beirut, Lebanon.

As always Mirna wanted to make sure that the filming took place in a breath taking area. The filming took 3 days and Model Baljiki took the role of the young man in the clip.

There were talks between Yara and producer Mirna Khayat on doing a musical movie to bring back the legacy of good performing film history to the scene but the work has not started yet.

Yara is also a producer, and co-owns T-Music (with Tarek.)

Help us improve this page:   Correct or update the Yara page