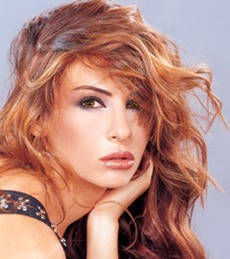 Nelly Makdessy also known as Nelly Makdissi or Nelly Makdisi is a famous Lebanese female singer. Nelly Makdesi was born on the 10th of October 1980. Nelly is also a good songwriter, instrumentalist and sexy Model.

Nelly Makdessy career began in the amateurs Television program Kaass Al Noujoum which was broadcast on the Lebanese Broadcasting corporaion - LBC in the early 1990s.
Nelly Makdessy won the first place in that program and got three golden cups. During that time, Nelly was studying law. Soon after she devoted herself to music and published three albums during the next three years, the first was entitled Shouf el Ein, Ahli Arab and her thirs was Ana Eih.

Nelly Makdessy appeared on magazine covers, the arab media followed her closely from the beginning.

Nelly performed in several festivals in Lebanon, the Arab World and international festivals.

Help us improve this page:   Correct or update the Nelly Makdessi page