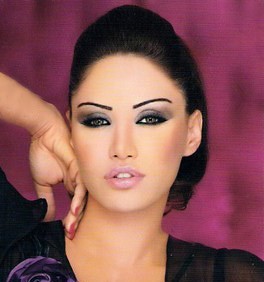 Myriam Shehab, better known as Melissa is a Lebanese singer born on the 26th of February, 1980 in the south of Lebanon.
Melissa was introduced to the Music Industry by Jean Saliba, and was meant to be the improved version of his earlier creation Elissa. Thus, the resemblance in the name, the body type, and also the sighing sexy voice.

After Saliba introduced Elissa in the 90's and played a major role in her success, the now proud singer decided she could do it on her own and broke off their collaboration in 2005 for financial reasons. Saliba found the perfect alternative: Melissa has a sexy rippled feminine body and very attractive features topped with almond shaped eyes and perfect luscious lips. She is packaged to please the visual fantasies of every man’s throbbing desires and hectic testosterone rages. This sexy singer is simply stunning, from head to toe! Melissa ranked #7 on the list of Sexiest and Most Desirable Arab Women for 2009, and dropped a few positions the following year when she ranked 19th in Top 100 Sexiest Arab Women 2010.

Melissa's first two singles, Leil Ya Leil and Kam Sana were good enough hits and introduced her to the Arabic music market.
Saliba and Toni Abi Karam worked on her debut album entitled Baddi Mennak, which was released in 2006.

But it was only until 2008 that Melissa really got a hype with the release of her album Mfakker Halak Min, the result of Saliba's collaboration with different Turkish composers and artists. Unlike her first album which was arranged by Jean Marie Riachi and Nasser El Asaad, the second album is a dance album which was arranged by Hadi Charara, Walid Sheraki and Aytekin Kurt.

Melissa also shot cool videos, where she appears as a sexy and modern girl dancing to hip modish tracks . She later stressed that image with two international collaborations in the form of duos with R & B sensations Dr. Alban and Akon.

Some televisions just couldn’t handle Melissa's sexy image and the heat she exhumed in her videos, mainly Mfakar Halak-Min and Yalli Nassini. Melody Hits TV Channel and Rotana resorted to blurring her thighs in her music videos; a sudden concern with public decency from channels that broadcasted and continue to broadcast far more suggestive videos. While some believed the jealous Elissa had something to do with it, others suggested it was a new marketing strategy by Saliba himself to promote Melissa as a "forbidden fruit".

Help us improve this page:   Correct or update the Melissa page