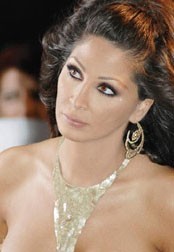 Elissa is an award winning Arabic pop singer from Lebanon.

In her first appearances, Elissa went for a sexy look and was for a long while labeled as the "blanket singer", referring to her very first videos where she always seemed to be half naked and partially covered with a white blanket! Gradually, and after she had gained the attention of the media, she started shifting to a more romantic and classy image. Elissa ranked eighth in Top 100 Sexiest Arab Women 2010 and previously also ranked #3 on the list of Sexiest and Most Desirable Arab Women for 2009.

Elissa’s success was originally due to her collaboration with the producer Jean Saliba, who helped pick out her songs and marketing schemes in the 90’s and until the year 2005. He played a major role in her success, before greed broke them apart. Saliba then found himself the perfect alternative: Melissa.

Elissa was born in Deir Alahmar on October 27th 1972. Her real name is Alisar Khoury. She was raised in the beautiful rural area of the Bekaa Valley.
Elissa got a degree in Political Science from the Lebanese University. Her first steps into art and music activities were in political critic theater of (Wassim Tabarah). She also appeared in the (10 O'clock Theater). Her success in theater encouraged her to venture into the music scene.

In the year 1993, Elissa won a silver medal for her performance at (Studio El Fan), a show broadcasted on LBC in one of the top TV programs then for new amateur singers, directed by Maker of the stars Simon Asmar.

Following her success at Studio El Fan, Elissa gave many live concerts until 1999 when Lido Production Company released her debut album, (Baddy Doub). It included her first smash hit by the same name with the famous French gypsy group, Gerard Ferrer.
The sucess of her first album took her straight to Cannes to participate in the International Music Festival in 2000.

Elissa released her second album, (Wakhreta Maak) which included the hit duo (Bitghib Betrouh) with Lebanese superstar Ragheb Allamah. many years after its release, the song is still a big hit, as it is still played on TV and radio today.

In June 2002, Elissa released (Ayshalak), an album which was the number one selling album in the Middle East.

For this album, Elissa surpassed the success of her previous albums. The video clip of the single hit 'Ayshalak' was shot in Paris with the acclaimed French director, Fabrice Begotti. Ayshalak unanimously remains Elissa's best song to date; an electronic ballad that is at the same time a dance pop tune and a romantic slow song, crowned with Elissa's soft voice.

This was not enough for Elissa who wanted more exposure, and teamed up in a duet with the world famous Chris de Burgh.

Lebanese Nights was the title of the produced hit, which was written by de Burgh during his trip to Lebanon in 2000. The song became a huge success in the Arab Music World.

Elissa teamed with production giant Rotana and several new albums were added to her portfolio.

Elissa most important event in the last few years included her Performance with Sting on the Pyramids Cairo.

Elissa was the only Arabic Artist to perform to the Ex President of the United States of America Bill Clinton for the Stars charity show in Dubai in the presence of Queen of Jordan Queen Rania and Crown Prince of Dubai Sheikh Mohamad Bin Rached Al Maktoum.

Elissa's album (Bastanak) was launched in 2006, this album was also a big success with many new songs.
Elissa also released (Ayami Beek) in 2007, and (Tsadaq Bmein)in 2009.

Her latest video is for a slow song (Abali Habibi)

Help us improve this page:   Correct or update the Elissa page