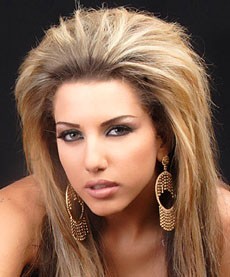 Dana Halabi, supposedly the only Arab Artist with no plastic surgeries what so ever...or so was the way Dana chose to market herself.

Dana Halabi was born in Kuwait in 18/01/1987, and has one sister and one brother. She lived most of her life in Tripoli- Lebanon, where she was brought up.

Dana most certainly took advantage of her natural beauty, to win as much beauty pageants as she could.
She was elected as Miss Magic Eyes in the year 2003,
She was also elected as Miss Oriental dance in 2004.
She was selected as 1st runner up is Miss Resort.

Dana Halabi always had an eager desire to become famous. This ambition was met half way by the Lebanese manager and producer Jad Sawaya, who made her dreams come true. He also directed her first video clips. She was then on her way to conquer the Arab World. Dana was barely nineteen years old!
Dana naturally used her charm and body to win over a sexually deprived Arabic public. Just like Madonna did in the 80's, Dana gave showbiz the sexiest and most provocative performances yet. A succession of hot music videos and naughty songs placed Dana at the top in a record time. The cute and narcissistic entertainer introduced herself to the public with the hit Ana Dana or I Am Dana, before releasing a full album of 9 songs.

Dana Halabi also appeared in a very funny Melody Hits TV commercial, in which she slaps the jealous Booby Julia.

Dana Halabi is now married and is expecting a baby.

Other hits include Ta2 Mout, and 100 percent (meya el meya). You can watch Dana Halabi's latest videoclips in our Video Gallery.

Help us improve this page:   Correct or update the Dana Halabi page