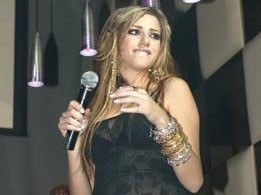 Dana concert canceled because of war


Dana Halabi, the booming lebanese singer, canceled her concert in bahrain which was to take place at Club Seven Mishal Hotel in Bahrain. The war in Lebanon forced her to cancel the event because most of the organizers were unable to contact her after the attacks in Lebanon took place.

Karim Miknas the general manager of Seven Leisure Group, said that the concert was postponed due to the war in Lebanon and to the closure of the Rafik El Hariri International Airport in Beirut.

Dana will not be performing in Bahrain at this time, Dana has chosen to stay with her family at this time.

Dana Halabi is today considered as one of the hottest rising stars in Lebanon. Dana Songs climbed the charts rapidly in the 2006. Her first hit songs Inta Meen? (Who Are You?) and Bos Alaya (Look At Me) drew a lot of attention from Lebanon and the arab world.

Early in the summer of 2006, Dana launched her latest songs and videoclips Meya El Meya (100 percent)

You can watch the videoclip in Dana Video Gallery.

Her Bahrain appearance which was canceled was to be part of a big tour in the middle east.

Help us improve this page:   Correct or update the Dana concert canceled because of war page