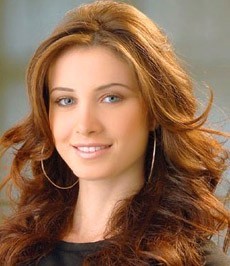 Anabella Hilal was first runner up during the Miss Lebanon 2005 contest. Anabella was the public's favorite and very close to winning the crown, but Gabrielle Bou Rached won the title in the end.

Annabella was born in Ashrafieh in 1986. Her full name is Anabella Samir Hilal. Anabella grew up in Ain El Remmaneh part of Beirut Lebanon.

At the time, Anabella was a university student studying Civil Law, with the ambition of becoming one day a Judge.

Her favorite food is the Lebanese Salad and the Italian Pizza.

Annabella is collaborating with several humanitarian organizations to help people in need.

Her motto in life is that Every cloud has a silver lining and Hope is the best way to overcome family problems.

Anabella took part in the Miss World 2006 which took place in Poland.

Like most candidates in beauty pageants, she ditched her original plans and finally opted for a more glamorous career in Television. She has hosted numerous TV shows and events, especially those related to beauty and fashion design.

On the 14th of November 2009, Anabella Hilal tied the knot with plastic surgeon Dr. Nader Saab. Many perceived this liaison as a complete mismatch and suspect it was some sort of a deal. Maybe something similar to what David Copperfield and Claudia Schiffer had? The rumors turned out to be wrong after all, because Anabella Hilal gave birth to a baby girl named Mayeva, on the 21st of August 2010... Mabrouk Anabella!

Anabella ranked ninth in Top 100 Sexiest Arab Women 2010. It was also rumored that she was noticed by Warner Brothers, for the casting of Wonder Woman (formerly played by Lynda Carter). Anabella Hilal stars as wonder woman on the big screen!

Anabella can currently be seen on LBC in a variety talk show called Helwe Wmorra.

Help us improve this page:   Correct or update the Anabella Hilal page