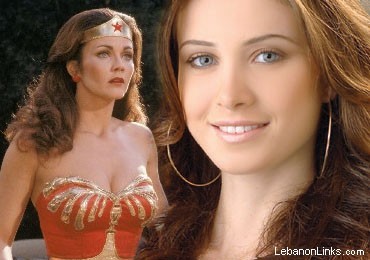 Anabella Hilal stars as wonder woman on the big screen


Could anyone who grew up in the '70s ever forget the social and cultural phenomenon Wonder Woman, portrayed by Former Miss USA Lynda Carter? Back then, Warner Bros. decided to bring the DC Comics super heroine to the small screen in the hopes of establishing a competitive show with the Universal television series the Bionic Woman.

Anyone familiar with the show would be immediately struck by Anabella Hilal first runner up of Miss Lebanon 2005/2006 resemblance to the American comic heroine!!

After the recent release of all the show’s episodes on DVD, it looks like Hollywood is getting ready to greenlight a big-screen version of Wonder Woman. The current front runner of the role is Sandra Bullock, partly due to her relationship to Warner Bros., where she has spent much of her career. Even Jennifer Lopez has expressed her interest in the role, during an interview on MTV.

Rumour has it though that WB are in the direction of casting fresh faces (like they did back in the days with Christopher Reeve as Superman), allowing an actress to come in the role without baggage.

Any idea where this is heading?? Yes you guessed right. Anabella was recently noticed by WB, through their representative in Beirut, and was called for a casting …

Help us improve this page:   Correct or update the Anabella Hilal stars as wonder woman on the big screen page

This Article was prepared by Edmond.Bouclaous
All copyrights are reserved to the Author of the Article