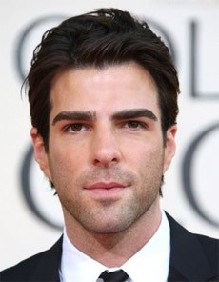 Zachary Quinto became popular for his roles as Sylar in the television series Heroes.

He was also known as Adam Kaufman on the TV series 24, and Sasan on So Notorious.

Zachary Quinto acted as Spock in the 2009 version of the famous Star Trek movie.

Help us improve this page:   Correct or update the Zachary Quinto page