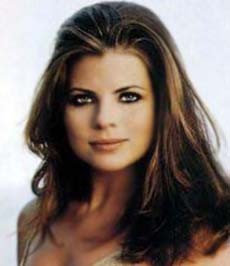 Yasmine Amanda Bleeth is a famous Actress from the United States of America, mostly known as Caroline Holden from Baywatch.


Yasmine Amanda Bleeth was born on the 14th of June 1968. She has Algerian origins in addition to Russian and French. Her mother is Carina, a famous model, and her father is Philip Bleeth, a famous business proprietor.

A former model and soap opera actress, Yasmine Bleeth became internationally famous after joining the cast of the iconic series Baywatch in 1994, as Caroline Holden.
Her first public appearance though was much earlier in the year 1969, when she took role in the famous Johnson & Johnson's - No More Tears baby shampoo advertisement on TV. She was ten months old at the time!

After Baywatch, Yasmine Bleeth made various TV appearances and had a comical part in the movie BASEketball (1998). In 2000 she co-starred in the short-lived Aaron Spelling TV series Titans.

Unfortunately Bleeth suffered from a deep depression. In December 2000, she voluntarily entered the Malibu-based Promises rehabilitation clinic to overcome a cocaine addiction. That didn't help since she was arrested and charged with possession in 2001. The next year she pleaded guilty, and was sentenced to parole and community service.

Yasmine Bleeth chose to put an end to her acting career and embraced a regular lifestyle, that of a homemaker; She is married to Paul Cerrito.

Help us improve this page:   Correct or update the Yasmine Bleeth page