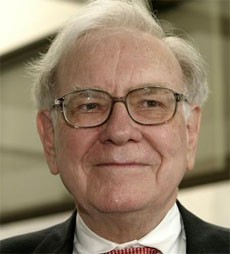 Warren Edward Buffett is a famous American investor who was born on the 30th of August 1930. Warren Buffett is a celebrity businessman and among the world's richest people.

Warren Buffett is the CEO of Berkshire Hathaway and the largest shareholder of the company.

Warren Buffett's $62.0 billion net worth made Forbes magazine rank him as the richest man in the world for the year 2008.

During the year 2006 Warren Buffett's annual salary was almost $100,000, which is considered as a low salary when compared to his position as a senior executive.

Buffett spent $9.7 million on buying a private jet for himself in 1989, the jet was later known as The Indefensible Jet.

Help us improve this page:   Correct or update the Warren Buffett page