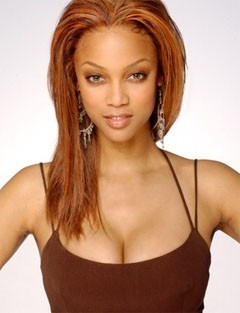 Tyra Banks is the creator and executive producer and judge of America's Next Top Model. Tyra Banks is a native to Los Angeles.

Tyra Banks started her modeling career in Europe and she drew her way into becoming a renowned international fashion star.

Banks became the first African-American model to grace the covers of both GQ and Sports Illustrated Swimsuit Issue. She was also featured in the Victoria Secret catalog.

Tyra Banks received the prestigious Michael Award for "Supermodel of the Year".

Tyra also was the face of Cover Girl for five years.

Banks can also be seen on her new talk show, "The Tyra Banks Show". The five-day-a-week program is designed to entertain and offer the "every-woman" insight into the issues facing young women today.

Tyra Banks began her television career as an actress with a recurring role in "The Fresh Prince of Bel-Air," opposite Will Smith. In addition, Banks got herself a deal with "The Oprah Winfrey Show" in which she appeared in a series of shows with Oprah over the course of two seasons.

Banks expanded her outreach in July 2000 when her self-funded charitable foundation sponsored the first year of TZONE, an annual summer camp experience for teenage girls designed to enhance independence and self-esteem.

After writing Tyra's Beauty Inside & Out which was published by HarperCollins, She realized that the trials she overcame as a teen could be used to teach young girls how to manage their self-esteem issues.

Help us improve this page:   Correct or update the Tyra Banks page