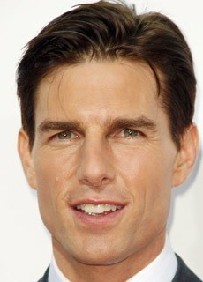 Tom Cruise is a famous American actor and movie producer.

His real name is Thomas Cruise Mapother IV. Tom Cruise was born on the 3rd of July 1962.

In the year 2006, Tom Cruise was ranked by Forbes magazine as the Most powerful celebrity in the world.

Tom Cruise has been nominated for 3 Academy Awards and won 3 Golden Globe Awards.

Cruise debut leading role was in the movie Risky Business in 1983.

In 1983, Tom Cruise had his first biggest successful role was in heroic character of a pilot in the hit movie Top Gun.

In 1985, Cruise stars in a strange experiment by Ridley Scott called 'Legend'. The fairy-tale fantasy movie depicts a world of dwarfs, unicorns and demons. After the horn of a unicorn is broken, darkness and winter descend upon the world. Cruise's character, helped along by a magic sprite played by David Bennent, descends into hell to save paradise.

In 1988, Tom Cruise plays Brian Flanagan, an ambitious young man who arrives in New York City and becomes known as the flashy bartender of a hot club. 'Cocktail' was a film directed by Roger Donaldson.

His other successful roles include the Mission Impossible action films in the 90s and 2000s.

In 2008, Tom Cruise played the vampire Lestat in the adaptation of Anne Rice's bestselling novel, Interview with the Vampire.

On the early morning of the 17th of June 2005, Tom Cruise proposed to Katie Holmes at the Eiffel Tower in Paris and she accepted. On the 18th of November 2006, they got married at the Odescalchi Castle in Bracciano Italy.


Help us improve this page:   Correct or update the Tom Cruise page