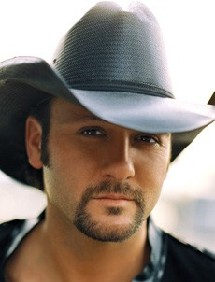 Tim McGraw is an American actor and country music singer.

His full name is Samuel Timothy McGraw, He was born on the 1st of May 1967.

His albums and singles were big hits in the country music charts, His album sales exceeded 40 million copies.

Tim McGraw is married to country singer Faith Hill. His best hit songs include Live Like You Were Dying, Indian Outlaw, Don't Take the Girl, Something Like That, and I Like It, I Love It.

Tim McGraw has also sung the song It's Your Love with his wife Faith Hill.

Help us improve this page:   Correct or update the Tim McGraw page