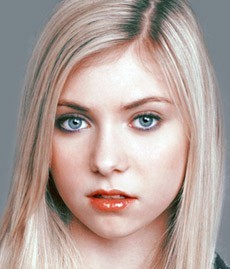 Taylor Momsen is a controversial young American singer and actress.

Taylor Michel Momsen was born on July 26, 1993 in St. Louis, Missouri. She appeared at the age of 3 on television in the commercial for Shake 'N' Bake.

As an actress, the sweet looking girl got her breakthrough in 2000, playing Cindy Lou Who in How the Grinch Stole Christmas, next to Jim Carrey. She later appeared in Spy Kids 2: The Island of Lost Dreams as Alexandra. In 2007, Taylor Momsen became Jenny Humphrey in the CW television series Gossip Girl.

Taylor Momsen then decided to break off from her good girl image, adopting a trash attitude, in her band The Pretty Reckless. Signed under Interscope Records in 2009, the band released their debut album in 2010 entitled Light Me Up.

Taylor Momsen became the new teens' idol, and freaked parents who were concerned by her indecent exhibitionist character. On stage, she sometimes flashes her chest at the crowd.

Help us improve this page:   Correct or update the Taylor Momsen page