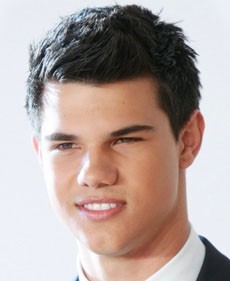 Taylor Lautner is a famous young American actor mostly known for his role as Jacob Black in the Twilight movie sequel.

Taylor is one of the highest paid teen actors, earning around $7.5 million per film. His full name is Taylor Daniel Lautner and was born on the 11th of February 1992. Acting actually came by accident; He was doing martial arts and his karate instructor who was already in the business gave him his first in Hollywood. He was actually the Blue Power Ranger for a year.

Lautner appeared in family movies such as The Adventures of Sharkboy and Lavagirl in 3D. He however gained international acclaim and fame for his role as Jacob Black in the Twilight movies along with Robert Pattinson.

His first appearance on television was in the 2001 movie Shadow Fury and the 2003 movie The Bernie Mac Show.

Lautner also took role in the comedy movie Cheaper by the Dozen 2.

In the year 2010, Taylor Lautner played the role of Willy Harrinton in the romantic movie Valentine's Day, for which he got Nominated the MTV Movie Award for the Best on Screen Kiss.

In the year 2011 Taylor Lautner will act in the movie Abduction.


Taylor Lautner is gradually becoming a fashion icon, and is often featured on magazine covers.

Help us improve this page:   Correct or update the Taylor Lautner page