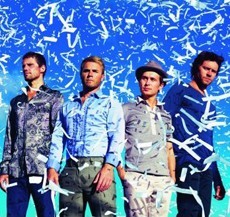 Take That is an Award winning English pop band who started as a boyband of five.

The band was created in the early 90s and consisted of Gary Barlow, Howard Donald, Jason Orange, Mark Owen and Robbie Williams.

Barlow was the band main songwriter. Each member performs vocals, and each has instrumental and songwriting skills.

Take That achieved major success in the early to mid 1990s. Following that Robbie left the group seeking a solo career.

In the year 2005, The band reformed without Williams and achieved a new success as a four member band.

Help us improve this page:   Correct or update the Take That page