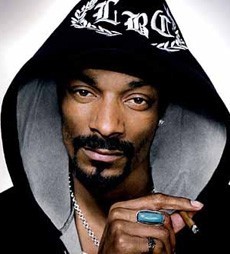 Snoop Dogg is his nickname and his real name is Cordazar Calvin Broadus. Snoop Dogg is a famous american rapper and singer.

Snoop Dogg is a Grammy Award-nominated singer and a record producer.

In the West Coast hip hop scene he is more known as MC.

Snoop Dogg is also an actor.

Help us improve this page:   Correct or update the Snoop Dogg page