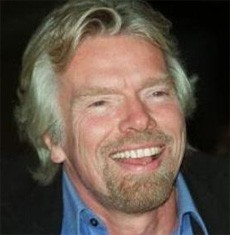 Richard Branson was born on the 18th of July 1950 in Blackheath, London, U.K.

Richard Branson is the Chairman of Virgin Group, which is worth $2.5 billion dollars.

In the year 1989 Richard married Joan Templeman. Earlier he was married to Kristen Tomassi, the couple divorced in 1979.

In the year 1972, Richard Branson established the record store, now known as, Virgin Records which later became known as Virgin Megastores. In the late 2007, it was rebranded after a management buyout under the name Zavvi.

Help us improve this page:   Correct or update the Sir Richard Branson page