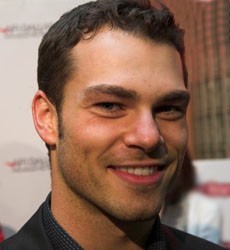 Shawn Roberts is a Canadian actor, best known for his role as Cody in the 2000 big budget blockbuster, 'X-Men'.

Shawn Roberts (or Shawn Robert's) was born on April 2nd, 1984 in Stratford, Ontario. After being spotted by Award-winning screenwriter Robert Forsythe (father of one of Shawn's friends) while playing the role of a wolf in a school play version of Little Red Riding Hood, Shawn Roberts began appearing onscreen as a child actor in Canadian television shows like “Sirens,” “Emily of New Moon” and “Goosebumps.”

In 2000, Shawn Roberts struck gold with his first big movie appearance, as Cody (Rogue's boyfriend) in the first X-Men movie.

Shawn Roberts is often given the role of the villain. He is known for playing the rapist Dean Walton in the Canadian television drama Degrassi: The Next Generation. He has also appeared in George A. Romero's Diary of the Dead and Land of the Dead. He played the angry boyfriend of Hayden Panettiere in I Love You, Beth Cooper (2009). In 2010, he appeared in Resident Evil: Afterlife, where he played the villain again as Albert Wesker.

In 2011, Shawn Roberts starred as 'Ors' in a post-apocalyptic indie thriller titled “The Riot.”

Because of his sex appeal, Shawn Roberts has also done a bit of modeling, such as for G-Shock watches print advertisements.

Help us improve this page:   Correct or update the Shawn Roberts page