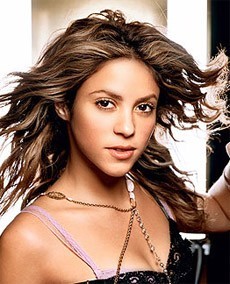 Shakira is a famous Colombian singer, her full name is Isabel Mebarak Ripoll. Shakira was born on the 2nd of February 1977. Her father is William Mebarak Chadid, who is of Lebanese descent.

Shakira is also songwriter, musician, and music record producer. Shakira is a great dancer and philanthropist who has been a major figure in the pop music scene of Latin America since the mid-1990s.

Shakira speaks her native language Spanish, in addition she is good in English, French, Portuguese, Italian and a little bit of Arabic. Due to her Lebanese origins and her oriental style of music (and her constant belly dancing in clips and on stage), Shakira is quite popular in the Middle East. She conquered the Arabic public long before the North American and European one. She also ranked 17th in Top 100 Sexiest Arab Women 2010.

Shakira is the girlfriend of Gerard Pique.

A false rumor spread in 2002 claiming Shakira had said 'I'd rather have pigs listen to my music than Israelis' on an MTV show. The obvious slanderous hoax was later categorically denied by MTV officials, assuring it never happened.

In June 2011 and on the invitation of Shimon Peres, Shakira visited Israel (occupied territory) to participate in the opening of the Israeli Presidential Conference titled "Facing Tomorrow", as a Goodwill Ambassador. Shakira thanked Peres and expressed her happiness for being in "Israel" the land considered the spiritual mother of civilizations in the world. These statements provoked Arab sentiments, and as a result many young Egyptians that felt betrayed joined a Facebook campaign calling for the cancellation of her upcoming Egypt concert scheduled for the 29th of November 2011 by Waleed Mansour.

Help us improve this page:   Correct or update the Shakira page