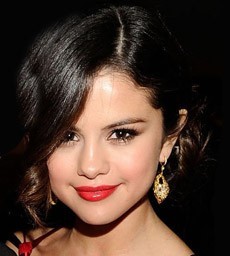 Selena Gomez is a famous American actress, singer, and entrepreneur.

Selena Gomez became popular after she played the role of Alex Russo in the TV-series Wizards of Waverly Place, an Emmy-Award winning Disney Channel production.

Following her success on Television, Selena took role in films and TV movies such as: Another Cinderella Story, Wizards of Waverly Place: The Movie, and Princess Protection Program.

Gomez also starred in the theatrical movie: Ramona and Beezus.

In the year 2008, Selena Gomez became a UNICEF Goodwill Ambassador.

In 2010, a lot of media talk began about a romantic or close friendship between Selena and Canadian star Justin Bieber. The couple went on a tour in Maui, Hawaii in the summer of 2010.

The two started a teen dream couple story for the media to witness and talk about.

Help us improve this page:   Correct or update the Selena Gomez page